Research on defects in semiconductors and semiconducting oxides (2002-2021)

Understanding defects and impurities is essential to understanding electronic and photonic materials and the devices made from them.  The goal of Stavola’s research program is to determine and understand the fundamental properties of defects in semiconductors and transparent conducting oxides that are important in technology.

Effect of H on the conductivity of transparent conducting oxides

The transparent conducting oxides (TCO’s)  are unusual but highly useful materials that combine transparency in the visible with high conductivity.  While the TCO’s have found many applications, the mechanism for their conductivity remains controversial.

Our experimental research program investigates how hydrogen impurities and their fascinating chemistry affect the electrical properties of semiconducting oxides.  The relationship of H-containing defects to the conductivity of several metal oxides (SnO2, TiO2, In2O3, and Ga203) is being investigated.

(i) Diffusion of H in In2O3.  Infrared spectroscopy, in conjunction with uniaxial stress, has been used to determine the diffusivity of H in In2O3 for over 10 orders of magnitude.

(ii) TiO2: TiO2 has been of long interest as an electronic and photocatalytic material.  The properties of H and D in TiO2, while studied for decades, reveal exciting new surprises.  Early studies of the vibrational properties of OH and OD centers in TiO2 found a single sharp vibrational line.  On the contrary, recent studies find a more complicated OH (or OD) spectrum with a multiline structure.  We have explored the temperature dependence of the multiline OD vibrational spectrum in detail.

(iii) Ga203, In2O3, SnO2, and ZnO: Infrared spectroscopy has been used to investigate the properties of H (and D) in single crystals of the prototypical TCO's, Ga203 In2O3, SnO2, and ZnO. H introduces several OH stretching lines and also the broad absorption arising from free carriers.  IR spectroscopy has been used to identify the sources of n-type conductivity, its thermal stability, and the structures and reactions of H-containing defects.

Our work on transparent conducting oxides has been recognized by invited talks at the 2013 and 2017 International Conference on Defects in Semiconductors, the 2016 symposium of the Japan Society for the Promotion of Science, and the 2021 March APS Meeting.

A low-cost process that is widely used by industry to introduce H is by the post-deposition annealing of a H-rich SiNx surface layer that is used as an anti-reflection coating.  However, important questions about the H that is introduced and its subsequent interactions with defects remained unanswered because the direct detection of H by methods such as SIMS is not  possible.

Our experimental studies of hydrogen-defect physics have provided novel strategies based on IR spectroscopy to measure the concentration and penetration depth of H in Si solar cells to determine the effectiveness of hydrogenation methods used by industry.  Our direct detection of H was recognized by a best paper award for a plenary session talk at the 3rd World Conference on Photovoltaic Energy Conversion in 2003, Osaka, Japan.

In other experiments we probe the properties of C, N and O in Si solar-cell materials.  For example, we have determined the structures and thermal stabilities of the defects that result from the interaction of H with the high concentration of carbon that is present in Si solar cell materials.  These C-H complexes provide a reservoir of H in Si solar cells that can interact with other defects.

Our research on the light elements in Si solar cell materials was recognized by an invited talk at the 2013 conference on Gettering and Defect Engineering in Semiconductor Technology, Oxford, UK, 2013.

The dilute III-N-V alloys have attracted much recent attention because of a large reduction of the band-gap energy that occurs for N concentrations of a few percent.  This surprising reduction in Eg is of interest for applications in opto-electronic devices.  To add to the surprising effect of N, the hydrogenation of these alloys eliminates the band gap reduction caused by N making the dilute GaAsN alloys a fascinating semiconductor system in which N and H can be used to tailor the band gap energy.

What are the N and H (or D) containing defects that are responsible for these remarkable effects?  IR experiments and theory performed at Lehigh over the past decade have found an H-N-H complex that can eliminate the bandgap shift caused by N.  The perturbation of the vibrational properties of GaAs1-yNy:D by stress has provided an elegant strategy to determine the microscopic properties of the D-N-D center.

The vibrational spectroscopy of H2, HD, and D2 in Si gave rise to a number of perplexing puzzles that concerned the rotational motion of these interstitial molecules.  Most experiments were interpreted in terms of a static hydrogen molecule whereas theory suggested that there should be a very small barrier to rotation.  The position and intensity of the HD vibrational line were also anomalous.  The key to the solution of these puzzles was our discovery of a new vibrational line for HD and the recognition that certain rotational-vibrational transitions are possible for HD that are not possible for H2 or D2 in Si.

Interstitial H2 in Si, while initially a puzzling and mysterious defect, is now, thanks to our studies of interstitial HD, a well understood model system whose rotational-vibrational spectrum reveals the important role of quantum mechanics in determining microscopic properties.

We have followed up these experiments with a study of the ortho-para transition of H2 in Si with a sensitivity that had not been possible previously. 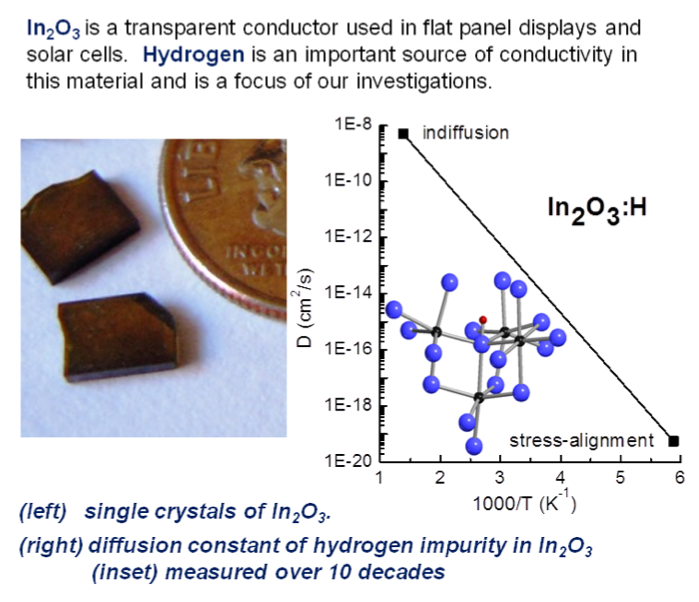